Necessary
These cookies are necessary to run the core functionalities of this website, e.g. security related functions.
Statistics
In order to continuously improve our website, we anonymously track data for statistical and analytical purposes. With these cookies we can , for example, track the number of visits or the impact of specific pages of our web presence and therefore optimize our content.
Marketing
Marketing cookies come from external advertising companies and are used to collect information about the websites visited by the user.
Construction & Real Estate
Environmental Technology
Municipal
services
Home > Current > News > Rabmer at the panel discussion "Will water be more valuable than oil soon?"

Rabmer at the panel discussion "Will water be more valuable than oil soon?"

Water could be more valuable than oil soon – at least in some regions of the world. Austria has sufficient reserves, but the regional availability and above all the consumption of hot water must be questioned critically, while there is no need to worry about the water rights. Ulrike Rabmer-Koller, CEO of the Rabmer Group, and Otto Roiss, Managing Director of the Bauer Group, under the direction of science journalist Martin Kugler (Universum Magazine, Die Presse), discussed the issue with university professor Jörg Krampe of the Vienna Technical University and Herbert Schlossnikl, Managing Director of the Vöslauer Mineralwasser GmbH. The panel agreed with IFWK (international forum for economic communication) founder Rudolf J. Melzer that technological innovations in water use and waste water treatment should be increasingly used in the future.

Two billion people around the world have to live with drinking water which is polluted with faeces and therefore poses a massive health risk. In 2025, half of the world’s population will live in regions with “water stress”, i.e. acute water shortages. The main countries affected are within Africa, the Middle East, China and India. With these alarming figures, science editor Martin Kugler pointed out how privileged Austria still is in terms of water supply.

Quality and distribution as a challenge

The question itself as to whether water was a scarce commodity has already been a tough one on podium. “Water is definitely not scarce. – Especially in our country we have enough of it, and according to a study by ÖVGW and BMNT the expected consequences of climate change for the water cycle are manageable from today’s point of view for water management in Austria”, Professor Jörg Krampe, Head of the Institute for Water Quality and Resource Management at Vienna University of Technology, clarified. The quality is also excellent, as Austria can obtain 100% of its drinking water from groundwater reserves.

People in this country actually use only 1% of the water available each year. Krampe said, however, that in other parts of the world there was a massive distribution and quality problem. The expert sees future microplastic contamination, organic trace substances caused by drugs in waste water and antibiotic resistance in water as major challenges in our latitudes.

Water as a political issue

“There is enough water in this world,” confirmed Otto Roiss, Managing Director of the Bauer Group, which is active worldwide with sustainable irrigation technologies and waste-water management systems. According to Roiss, the challenge lies in having high quality water available at the right time and in the right place. “While many regions and Western and Northern Europe have a surplus of water, continental regions in Asia or the Middle East have far too little; and if they do, they have poor quality. Rivers and groundwater sources are over-exploited and often threatened by political conflict. In the Middle East, oil is indeed cheaper than water,” says Roiss, describing the different conditions. 90% of the water is consumed in agriculture, partly with outdated methods such as flood irrigation, which consumes several times the actual demand. “With modern mechanical irrigation, 50% of the water can be saved – in some cases even more,” mentions Roiss.

Entrepreneur Ulrike Rabmer-Koller, CEO of the Rabmer Group, believes in a possible increase of water shortages in our latitudes as well. “The dry summers of recent years have severely affected agriculture in parts of Upper and Lower Austria which will lead to an increasing demand for irrigation capacity in the future. In addition, more and more water is consumed in urban areas. Water is already scarce in individual regions, and availability must be secured by making costly investments in piping systems,” she points out, and appeals for a conscious use of water as a resource and for countermeasures at a technical level: For example, by renovating existing water pipes on a large scale to counter water losses caused by leaks or by saving water and energy for hot water heating in private households when showering. The entrepreneur also pleads for more intensive consideration of two separate water cycles (drinking water and process water) and for the promotion of rainwater storage systems such as trenches in car park management.

“No danger of sold out water in Austria”

Agriculture uses most of the water – but consumers of mineral waters have the highest awareness regarding quality. The peak phase of export waters from other countries has come to an end, says Herbert Schlossnikl, Managing Director of the Vöslauer Mineralwasser GmbH, for his industry. He sees a clear trend towards glass bottles: “We reissued the returnable glass bottle a few years ago and are noticing a sharp increase in demand. Our second bottle is the PET, made out of 100% recycled material, which weighs significantly less and is, above all, unbreakable. According to recent studies, the PET bottle is even more environmentally friendly than the glass bottle”.

Schlossnikl does not see the political danger of water being sold out in Austria. “The consensus on water rights, creates clear frameworks – also for mineral water extraction. The sources have to be protected, only as much water is allowed to be withdrawn as it is able to reproduce and the interests of other users must not be impaired.

Such clear regulations do not exist in many regions of the world, for example in Central Africa and the Middle East, Otto Roiss noted critically.

There was agreement among the panelists that awareness of the importance of healthy drinking water had risen. It would be less clear to the people that it would also be important to conserve resources all around drinking water as well. The production of meat or jeans is extremely water-intensive, said water expert Krampe from the TU Vienna. There are many ways to counteract this.

Images and text provided by the International Forum for Business Communication. 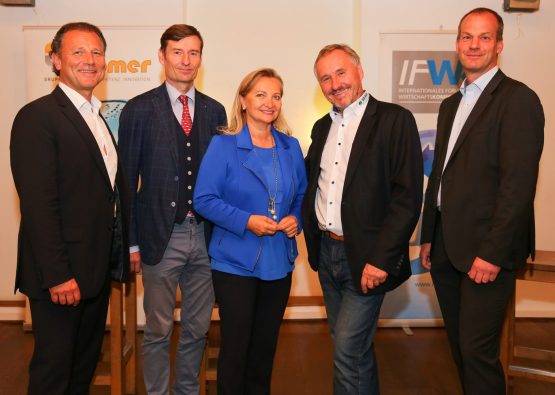