Necessary
These cookies are necessary to run the core functionalities of this website, e.g. security related functions.
Statistics
In order to continuously improve our website, we anonymously track data for statistical and analytical purposes. With these cookies we can , for example, track the number of visits or the impact of specific pages of our web presence and therefore optimize our content.
Marketing
Marketing cookies come from external advertising companies and are used to collect information about the websites visited by the user.
Construction & Real Estate
Environmental Technology
Municipal
services
Home > Current > News > AQUABION® Success Story - limescale and corrosion protection in the largest dormitory in Linz

The Rabmer GreenTech can point to another successful reference for the patented AQUABION® lime and corrosion protection. About half a year ago, it was installed in the water supply system of the largest student hostel in Linz, the Julius Raab Heim with around 600 rooms.

At the end of 2016, together with the Linz plumbing company Laban, the water supply network in the main building and the outbuilding was analyzed and the complete conversion to the chemical-free AQUABION® system was prepared. At the beginning of February, the time had come: within a few hours, the existing ion exchangers and chemical metering stations were dismantled and replaced by corresponding AQUABION units in the cold and hot water pipes.

Today – 6 months later – Julius Raab Heim Managing Director Seiringer Peter is convinced that he has made the right decision: “By installing the AQUABION®, we have finally solved the problem with rusty water and are also saving on the ongoing operating costs for salt, Dosing agent and lower water consumption. It is also astonishing that due to the excellent limescale protection effect of the AQUABION®, the water pressure on the upper floors has already risen again after a relatively short time! ”

Alfred Laban, owner of the well-known Linzer installation company and responsible for the project implementation on site, is also enthusiastic about the AQUABION®: “In recent years we have implemented several AQUABION® projects together with the company Rabmer, always satisfying our customers. Whether it’s corrosion or lime problems, the AQUABION® always works reliably and has the distinct advantage of working without any chemicals. This keeps the water in its original form with its good taste and is not negatively affected by corrosive behavior. This has proven itself again in this project! ”

We are pleased that with this project we were again able to prove the outstanding effectiveness of our AQUABION®.

You can see pictures of the project on our YouTube video. Further information about the AQUABION can be found at www.aquabion.at or you can directly contact the Rabmer GreenTech specialists via greentech@rabmer.at. 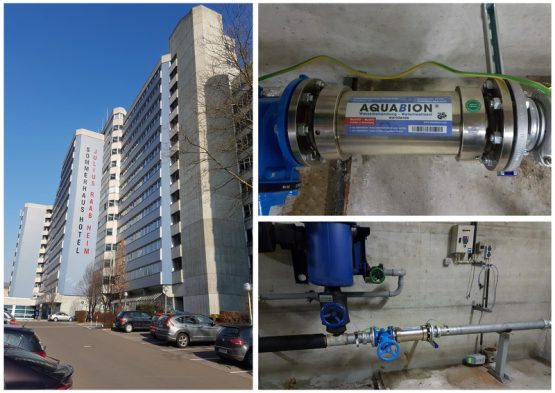